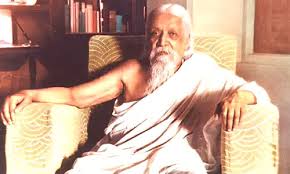 Sri Aurobindo Ghose – nationalist, philosopher, poet - was born on 15th August 1872 in Kolkata. He was an influential leader of the Indian Nationalist Movement who propounded a philosophy of divine life on earth through spiritual evolution. Sri Aurobindo was a visionary who created an awakening about education being a primary tool in the growth of the youth. He openly advocated the idea of complete independence for the country in his newspaper Bande Mataram.

Aurobindo’s evolutionary philosophy, known as integral yoga is explored in his main prose work, “The Life Divine” (1939). He rejected the traditional Indian approach of striving for moksha (liberation from the cycle of death and rebirth, or samsara) as a means of reaching happier, transcendental planes of existence. Instead, Aurobindo held that terrestrial life itself, in its higher evolutionary stages, is the real goal of creation. He believed that the basic principles of matter, life, and mind would be succeeded through terrestrial evolution by the principle of super mind as an intermediate power between the two spheres of the infinite and the finite. Such a future consciousness would help to create a joyful life in keeping with the highest goal of creation, expressing values such as love, harmony, unity and knowledge and successfully overcoming the age-old resistance of dark forces against efforts to manifest the divine on earth.

Sri Aurobindo considered the formation of a new system of education as one of the best means of preparing the future humanity to manifest upon earth a divine consciousness and a divine life. Sri Aurobindo believed in the acquisition of not one education, but various kinds of education. He advocated that education should be a tool to construct the human mind and spirit to be strong and powerful and help in surviving the trials and tribulations of the complexities of modern life. He viewed physical purity to be an indispensable requirement of physical development in one's life, which can only be acquired through proper moral and value education. He emphasized the importance of awakening of senses for spiritual upliftment.

Sri Aurobindo assigned a very important role to the teacher as a a role model, philosopher and guide in a student's life. The teacher plays a very significant role in motivating students to attain self-consciousness and to earn conscience to its verity.

The ideological frames given by Sri Aurobindo are universally accepted in the development of curriculum and as a constructive, creative pedagogical base for moral upliftment of the institution.

Aurobindo’s voluminous literary output comprises philosophical speculation, many treatises on yoga and integral yoga, poetry, plays, and other writings. In addition to The Life Divine, his major works include Essays on the Gita (1922), Collected Poems and Plays (1942), The Synthesis of Yoga (1948), The Human Cycle (1949), The Ideal of Human Unity (1949), Savitri: A Legend and a Symbol (1950), and On the Veda (1956).